78 weeks of nerdery have come and gone in a hurry, and now the questiony goodness of our 79th week is descending like a sexy mist upon your…what?
Uh…nevermind, let’s just forget all this weirdness and dive in!

This week, due to the return of an icon from the 80s and 90s, we want to know: Who Or What Are You Most Excited To See From Star Trek: Picard?

As all listeners to the main show know, I’m relatively new to Trekdom.
I’ve seen roughly sixty eps and five movies of the more than six hundred episodes and dozen or so movies.
Also, folks who know me know that I always go looking past what appears on the screen to get a deeper understanding and appreciation of the various characters and universes that tickle my fancy.
In that regard, why should Trek be any different?
Let’s figure out together what I think of this book, because it’s a bit more complicated than normal.

As per usual, this should be taken as your official ***SPOILER WARNING*** 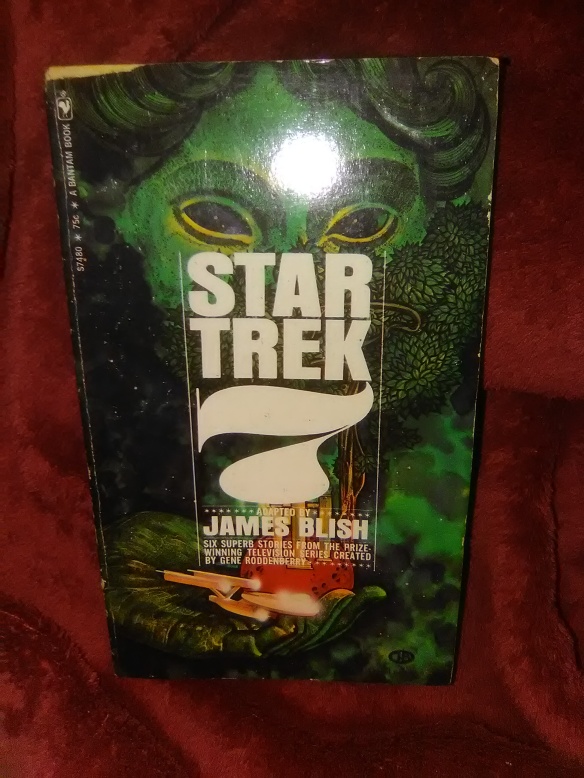 Published in July 1972, this book is a short story collection that adapts 6 episodes from Star Trek’s original 1966 series into prose.
Now 1st of all, I have to say up front here that I have never watched any of the Episodes that are adapted within this book, and in my research, I found that author James Blish apparently hadn’t either, and boy does it show a few times!
According to Wikipedia, Blish reportedly wasn’t a fan of the TV series, but the books paid well and kept him afloat.
Never is it more apparent that he didn’t watch the show than when he writes of people slamming doors in frustration aboard the Enterprise.
Even I, in my limited (but ever growing) Trek knowledge know that the doors on the 1701 are automatic!

The 6 episodes he adapts are “Who Mourns For Adonais?”, “The Changeling”, “The Paradise Syndrome”, “Metamorphosis”, “The Deadly Years”, & “Elaan Of Troyius”, the most famous of these episodes (at least from my feeling) being Metamorphosis.
I’ve heard a lot about this one after watching TNG eps and watching all 4 of the TNG era movies.
Zefram Cochrane, the man who was responsible for humanity’s warp travel and introducing Earth to the galaxy at large makes his very first appearance.
Here, still alive after more than 150 years after he was presumed dead, is the dude being kept alive by a malevolent energy force on a far flung planet.
It’s interesting to see how this character went through such a change between this and the TNG era.
As I’m hopeful the episode itself does, this adaptation gets across that he truly is a legend in the universe, and it’s fun seeing how Kirk and the other icons that the audience watch form before their eyes interact with a character like that.

There are some batshit wacky stories in these here hills too, but that doesn’t mean they’re bad.
For instance, Who Mourns For Adonais?, where we learn that the Greek gods were real aliens who craved our devotion, then left Earth when humankind turned our backs on them.
It’s a pretty clever exploration of our mythologies and where they may have come from.
Another great example of wackiness is The Deadly Years, where the landing party of The Enterprise is infected with a rapid aging disease that calls into question the mental facilities of the commanding officers.
It’s a solid sci-fi exploration of aging and experience.
Both stories are way out there, but both are fun and interesting.

To start wrapping up, I think the weirdest thing about this book is that it yet again points out the huge difference between 60s TV and modern TV shows that I’ve talked about many times in regard to Scooby, and it’s never meant as a slam.
Not a one of these stories runs over 40 pages, and while reading it’s hard to believe these stories filled an hour of TV at any point in history.
While they are great stories, there’s a lot of hallway walkin’.
And I’m not quite sure if the lack of detail is a result of the time or Blish’s alleged disinterest.
But my most important take away after reading this is that while I’m only halfway through Season 1 of TOS, I know for I certain have more high quality stories to watch.
Because if a dude who doesn’t even like it can pull this much fun out of it, the actual episodes have to damn good.

Special thanks to @ACFerrell1976 for her editorial assistance.