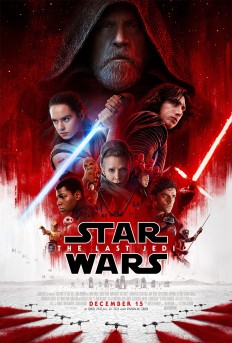 The Last Jedi has been out now for 3 weeks. It’s no secret that a relatively small but VERY vocal minority of “fans” are having a hard time accepting the latest chapter in the saga, and while I’ve not yet heard anyone accuse Rian Johnson of raping their childhood, I’ve seen reactions almost as ridiculous and disconnected from reality.

It’s gotten to the point where I feel like I need to rebut some of the more outlandish posts and videos out there.

I asked Doom to pick some reviews from the big sites to see if I could counter their arguments and present these rebuttals as an ongoing series of blog posts. Naturally he found this video which basically contains every major criticism of the film in one whacky whiny package.

Before I start let me just say, these are just my opinions. These are not a call to arms or a declaration of fan civil war. These rebuttals will simply be my attempt to defend a flawed but ultimately very good, very satisfying entry in the Star Wars Saga from some disappointed and very misguided knee jerk reactionary fanboys.

Oh. And #SPOILERS will abound. You’ve been warned.

My first rebuttal (which will actually be a multi post rebuttal) will be directed at this video posted by Mr. Flick Flack Films (9 subscribers). The video is 6 minutes long and currently has 103 views.

Here is the link to the original video, but I will be quoting it directly throughout this post:

In this roughly 6 minutes, Mr. Flick Flack Films manages to hit every major criticism of the film that I’ve seen other reviews/rants make. He gets points for quantity. Not so much for quality of arguments.

Me too. This is one of the best parts of Star Wars fandom. The spaces in between the official stories, filling that space with your own speculation and theories as to what will happen next, or what something in a previous film really meant.

I grew up in a time where the space between (actually the space AFTER) was endless. There were no more stories. All we had were the stories we told ourselves. The theories we created or pieced together over hours of conversations and deep thought.

In the last two years, I too spent hours and hours coming up with what I felt would be the main outline of what would happen in episode 8. When the first trailers arrived, I felt like I had nailed it.

Rey would meet the crusty Luke and find him broken and unwilling to help.

Eventually he would reluctantly train her, and in the process find his lost faith.

He would then return with her to the Resistance, happily reunite with Leia, and fight Snoke as Rey again faced Kylo Ren.

DJ would be an ex-imperial or ex-rebel spy whose outlook would mirror Luke’s disillusionment. Rose and Finn would convince him some things are worth fighting for and he would join the resistance and fill the Han Solo scoundrel archetype, bringing in some necessary special skill the rebels need.

And yet when I saw the film, almost all of my theories and speculation were not just proven wrong but destroyed in epic, bold ways I couldn’t have imagined.

This film slapped me in the face and told me I was an idiot for thinking any of that.

This is where the fun begins.

This film did slap the audience. An audience that bitched and moaned about TFA being a total re-skin of A New Hope. An audience that vocally complained JJ didn’t take enough risks or add anything new to the saga (all weak claims as well by the way)

So yes, Rian Johnson slapped us all across the face with a “Hold my beer” movie that goes places both epic AND dark.

Just not epic and dark in the ways you assumed it would.

And yes, at first it does feel like a personal insult that nothing you thought would happen DID happen.

But when you open your eyes to what’s actually ON THE SCREEN and not what’s in your mind, you see that almost everything in this film is done for a reason. Very specific and important reasons.

You may not like the reasons, or agree with them, but that alone does not a bad movie make.

This film slapped you in the face and called you an idiot. Not for the theories you dreamt up, but because when presented with the truth of Episode 8, you held on to those theories like a petulant child.

You deserved to be slapped. Everyone needed a good slap. Wake up and smell a new direction in Star Wars.

Disney gave this film to Rian Johnson. A person I personally think HATES everything about the old Star Wars.

In a video full of preposterous statements, this may be the most egregious.

Read or watch any interview with Rian Johnson and it will be apparent, very quickly, that he loves Star Wars.

Just like JJ he is a bona fide O.G. Star Wars fan. To accuse him of actually hating all the Star Wars content that came before The Last Jedi is an absolute insult.

Pick up a copy of the Art of The Last Jedi and you’ll read one particular quote that is the best example of this.

In it Johnson talks about being a kid and seeing the OT films and doing all the same shit that we did. Theorize about character’s backstories, create new stories and adventures with the Kenner toys, basically live and breathe Star Wars.

Agree or disagree with the end result but there should be no mistake, Rian Johnson set out to make the best possible Star Wars film he could, and help move the saga forward into a new era of storytelling.

The first thing Luke does with the lightsaber is a metaphor for what Rian Johnson did to everything JJ Abrams set up in The Force Awakens.

The first thing Luke does with the lightsaber is perfect. If there’s anything meta about it, it’s that Rian Johnson is warning the audience to abandon any preconceived notions they might’ve had going into the movie.

Think about it. He tells Rey, and the audience, in no uncertain terms at multiple points in the movie. I came here to NOT BE FOUND. I came here to DIE. I am NOT GOING BACK.

He even says it later “What did you think was going to happen?”

Rey shows up out of the blue, able to find him in the most unfindable place in the galaxy, hands him a lightsaber hilt he hasn’t seen since he watched it fall into an abyss with his hand still attached, and says we need your help.

What SHOULD his reaction be? Luke’s reaction was perfectly in line with where the character is when we meet him in Episode 8. Throwing the handle away and storming off is EXACTLY what someone in his frame of mind would do.

I understand being disappointed that it wasn’t the heroic “gee whiz guess they really need me” moment we all expected. But this is so much better. It is truth.

If he wanted to help, if he felt like he COULD help without ruining anything else or causing more harm than good (which later we find out is in fact an understandable concern) HE’D ALREADY  BE HELPING!

So his middle finger response to Rey is completely understandable. Is it heroic? No. But that’s the point. This is what can happen after happily ever after.

He is a broken man unable to come to terms with his failures. Everything he previously fought for is gone or going away fast. He has no hope or faith left. No shits to give. “So just let me die already”, seems to be his general feeling.

And here is this girl trying to drag him back.

This is not Rian Johnson throwing away everything JJ had set up in TFA. This is Rian Johnson not taking the easy way out, and instead presenting the audience with a difficult truth. Luke Skywalker is a broken old man who believes the galaxy is better off without his “help”.

The rest of the movie is in the end about him re-finding his faith and his purpose. But again, not in the overtly heroic way you expect.

I pray that Rian Johnson does NOT get his trilogy. I hope Disney sees all the dislike for this film and takes it away from him.

$1 billion dollars in 3 weeks. That’s all you need to know. No amount of whiny butthurt “fans” will ever outweigh that many zeros.

Luckily, Disney is giving this new trilogy to an actual storyteller and not a Michael Bay event film hack or a mercenary with no passion for the source material who’s in it just for the big payday.

Rian Johnson will get his trilogy and it will be fine.

Believe it or not gang, that was only about 1/3 of the content in this video.  Join me next time as we dive back into the murky waters of the deluded fanboy psyche.

And if you haven’t already go see this movie.  It really is good if you give it a chance.  It’s even better the second time.  And the third.